The pattern and rhythms loosely define the journey, allow the eye to hover and wait in a section, live for a moment in a rich and slippery deep red before the flicker of repeated pattern or colour in another section moves it on, and on again, in an endless meditation. It is a compelling piece.

One direct route in leads from the left in the first grey and black panel where the unit of blocks sit on the left in independent, aloof, cooler in colour than its companions. The lower left three blocks within this panel are broadly but not exactly repeated in the fourth, and so the natural journey begins across the divides, picking up tonal patterns and colour shifts, finding suggestions of links and repeats but the drive is always on to the next possibility. 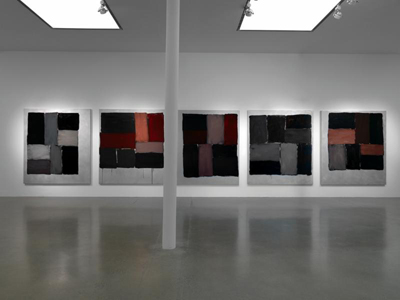 Within each panel the blocks of colour huddle and jostle in units unattached to the edges of the support. Most of the brushwork is either clearly horizontal or vertical and follows the shape and direction of its block – the horizontals sliding the energy through to the next panel, the verticals through to another broken edged block within the panel. In other areas, not many, the brushwork is less formal, slowing down the movement by creating an internal rhythm rather than leading the eye onwards. Spaces between the colours, shafts of silver light, flash through the five panels, referring one to one another across them and restricting entry to space beyond.

There is a mystery in some paintings which set them apart and which defies explanation. Sitting with them becomes a reflective experience – they don’t give up their secrets, perhaps they have none to give and all the answers are inwards, personal to the viewer. They are fascinating partly because they don’t have a story to tell but offer a suggestion of your own, and then only if you give them time.